Jim Walmsley recently ran the 2019 Western States Endurance Run in a breathtaking 14:09:28. He broke his own course record (2018) by a good 20 plus minutes. For an inland California midsummer, the weather was uncharacteristically comfortable. The high temperature of 83 degrees was the lowest race time temperature since 2012.

Undoubtedly, the cooler weather aided in the runners’ efforts. Aside from a shattered course record, this year saw a record percentage of runners completing the race (86.4 %). Of the 369 race starters, 319 earned a silver or bronze buckle. Since the mid 1990s (with some obvious exceptions) the completion percentage at the WSER has crept ever higher. There is an obvious trend toward more runners finishing the race. Figure 1 shows WSER completion by year from 1980 on-wards. The green line represents completion percentage, the red line represents DNF percentage. There is a general divergence between these two lines. Red is pushing down, while green is moving up. This means more runners are completing the course in regulation time at the expense of DNFs. 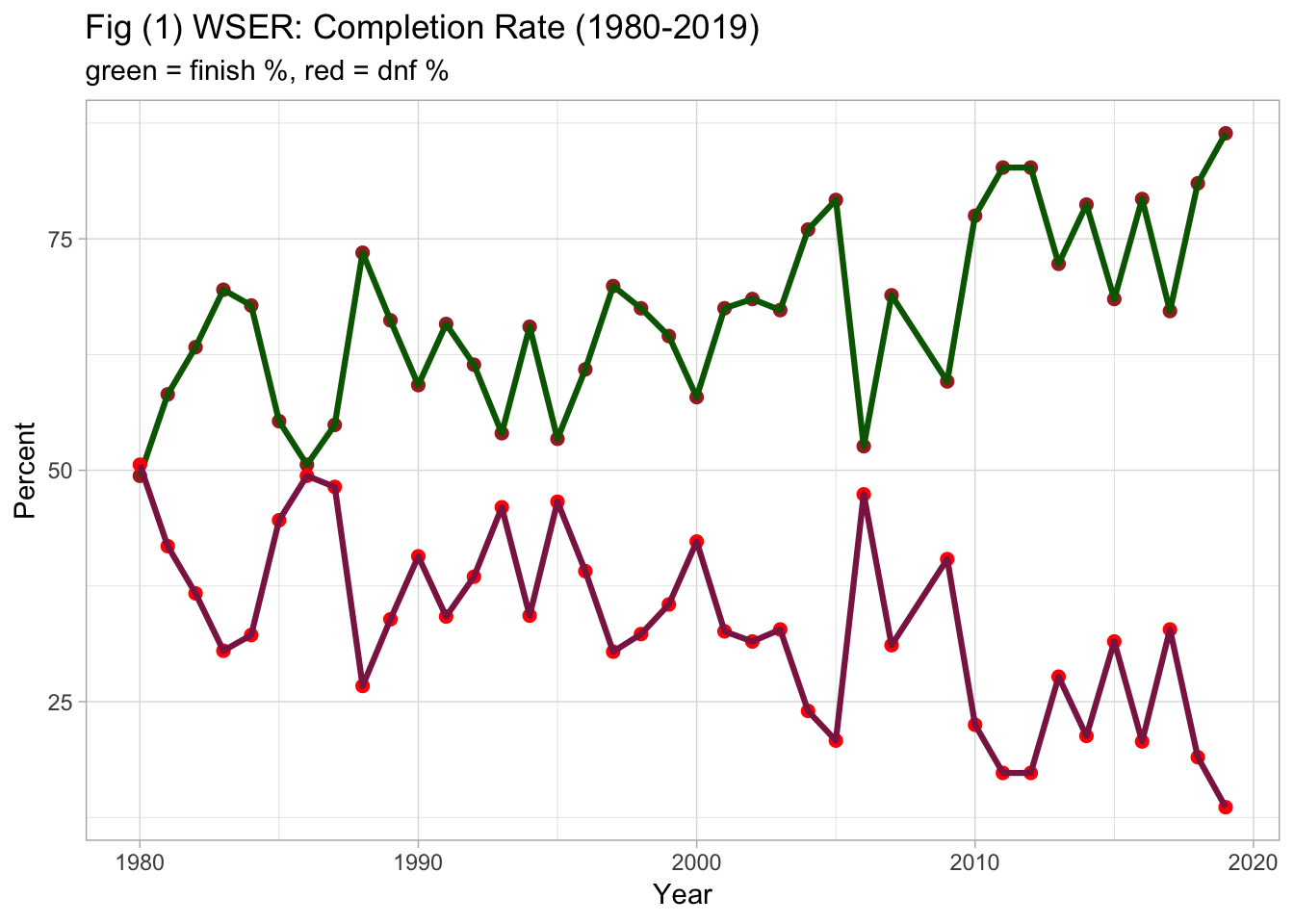 There are surely a number of reasons for this trend. For one, the race has grown immensely in popularity. This growth has forced entry requirements higher and has attracted ultra-runners all over the United States and Worldwide. Also in part: technology, nutrition, training plans, pacing strategies, pain management have all evolved and developed since the race’s founding days. All of these factors gradually improve with the passage of time and may contribute to the higher race completion percentage. This post is not about these factors. Rather it will focus on the other side of the performance coin, an external factor that affects racing performance from year to year and race to race, namely: temperature.

Back to the 2019 running of the WSER. The temperate temperature allowed runners to spend less energy on keeping their bodies cool. These excess stores of energy allowed 130 runners to finish at Silver Buckle pace and 189 to finish within Bronze Buckle pace. A good day for most was had. What would have these numbers have looked like if the temperature had been 10 degrees warmer? What about 15 degrees? What about 10 degrees cooler? That is, how much of an effect does temperature have on a runner’s ability to complete the WSER. 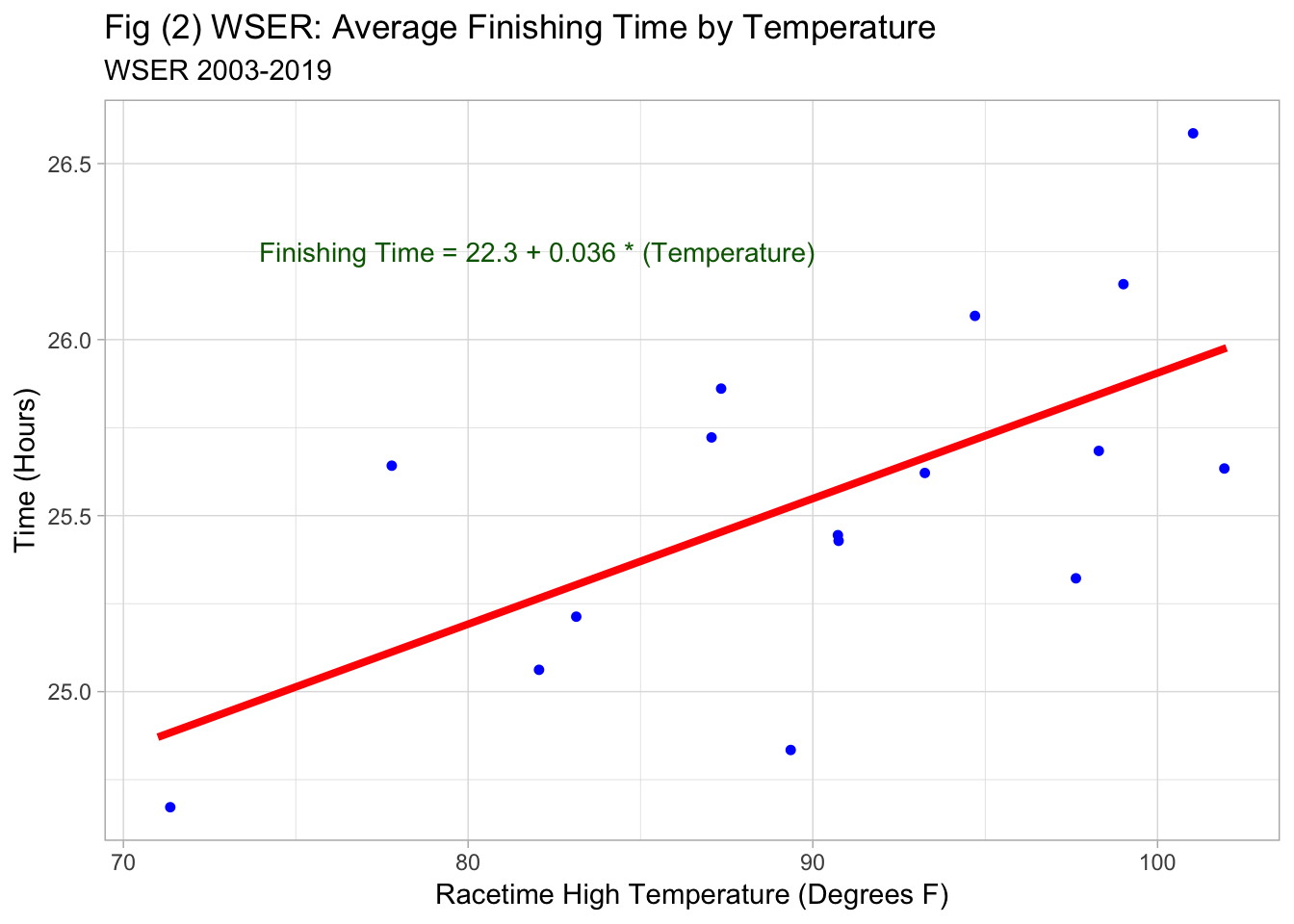 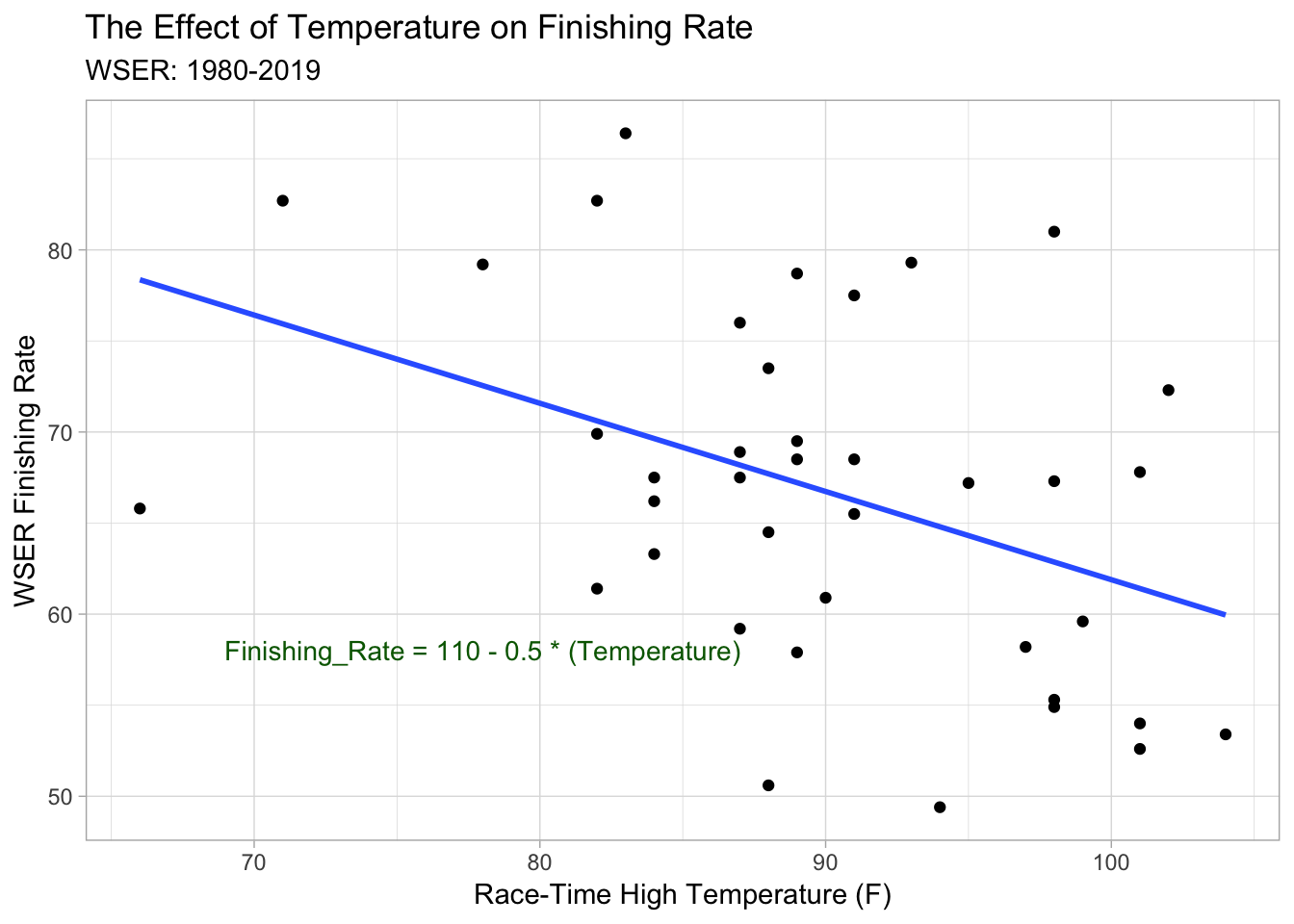 What does this mean for WSER finishers? The table below summarizes the results of this simple investigation. The estimated average finishing time and finishing rate are shown for 4 hypothetical temperatures.